a brand of VIAJES PENTAGRAMA S.A.

Cotopaxi: a volcano at the center of equilibrium.

After the discovery of America, when the Spanish conquerors came to this continent bringing their horses, a cycle that had begun some fifty-five million years ago was finally completed. It is because it was in North America where the Eohippus would appear, a mammal the size of a small dog, from which it is assumed that all subsequent equids descend. Over millions of years, the Eohippus evolved, increasing in size and modified its legs until it lost its fingers and took the shape of a hoof, which would allow it to run faster and escape its predators.

But about fifteen thousand years ago, when the Beringia Bridge was formed and humans began their travel to America, the horses would do the same but in the opposite direction, finally becoming extinct in this part of the world about ten thousand years ago.

So, when they returned to America, many horses escaped from the haciendas and formed their own wild herds, such as the mustangs in North America, the “baguales” of Chilean and Argentine Patagonia or the wild horses of the Cotopaxi National Park, in Ecuador. 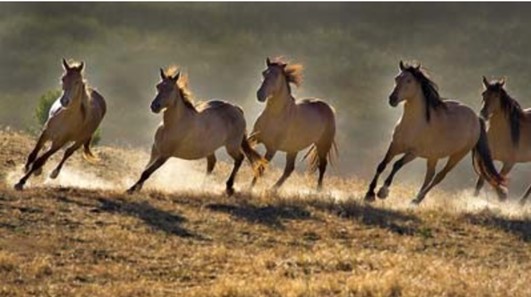 It is precisely at Cotopaxi, where the horse has arrived, let's say, after a 360-degree journey, where its presence represents a possible imbalance. On one hand, its permanence in the national park puts the equatorial Andean moor ecosystem at risk, but on the other, the horse is one of the main sources of food for the Andean condor, about to become extinct in Ecuador.

It is this kind of dilemma that gives the word balance its true magnitude. You have to be very careful when leaning to one side or the other, or we may be bound to lose it.

The Andes mountain range runs through Ecuador from south to north, dividing the country into its three main regions: the coast, the highlands and the east. Along 350 kilometers of this mountainous strip is the Avenue of the Volcanoes, where a score of volcanoes, some still in activity, create a unique setting. Among these is the Cotopaxi, the sacred volcano of the Incas.

Marco: Being an almost perfect cone, the top covered with snow, standing out from the rest of mountains and volcanoes, it is highly admired by locals and foreigners.

He is Marco Peralvo, guide from Metropolitan Touring in Ecuador.

Marco: I would say that it is the best-known volcano in Ecuador. Although it is not the highest, but its beauty is truly unique.

This volcano, which is the central figure of the National Park that bears its name, is still active, and although its last major eruption was in 1877, it is not known for sure when the volcanic activity inside it will make itself heard again.

Marco: Many times, the eruption itself, the lava or the pyroclastic material is not so harmful or dangerous for human settlements or the environment around the volcano, but the lahar is really problematic. 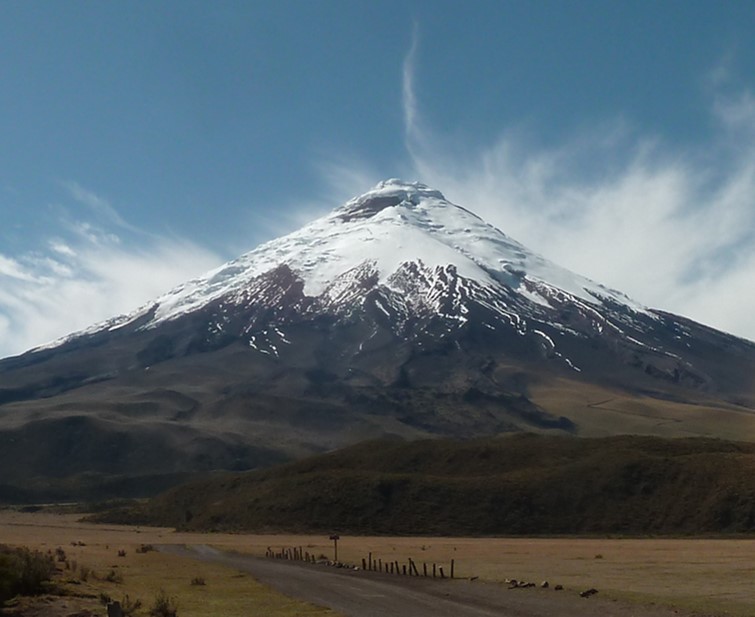 A lahar is an avalanche that is mainly a lot of water and volcanic material. Being a snow-covered volcano, during the eruption the glacier melts, creating a sort of river of stones that descends at high speed, destroying everything in its path. In the event of a possible eruption, the Cotopaxi lahars will follow the riverbeds, affecting towns and cities, and some will head towards the Pacific Ocean, a distance that can be covered in less than 24 hours.

resulting from a possible eruption of the Cotopaxi, can affect the lives of the people around the park and even the inhabitants of Quito, the capital city of Ecuador, it must be taken into account that the activity of the nearly 250 volcanoes throughout the country is precisely what has made Ecuador such a rich and beautiful nation in terms of biodiversity and landscapes. As harsh as it may sound, while the ash from a volcano can ruin the year's crops, the ash works as a natural fertilizer that will ensure excellent agricultural productions for years to come, as long as they are made with the necessary technical assistance.

The Cotopaxi, being the central star of the park, is also the source of exciting experiences and great adventure, including cycling activities, especially downhill biking, where bicycles are transported to a height of 4,600 meters and from there the visitor can go down through fixed trails as far as the slopes of the volcano. With warm clothing and the necessary protection gear, the journey allows the tourist to have a beautiful image of the entire park, feel a bit of adrenaline and see how the landscape changes as the altitude descends.

Another activity that can be perform is climbing the volcano. Logically, this is not an activity that all visitors are willing to do, especially because it has medium level difficulty, so only 30% of the climbers reach the summit. The climb lasts about six hours, but it must begin at midnight, as the rays of the sun melt the ice and snow during the day, making it impossible to climb. Thus, along with the sunrise the adventurers are already undertaking the return. 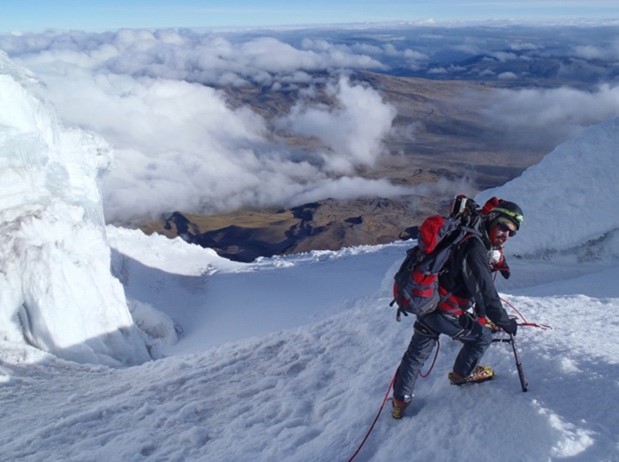 But the importance of the park lies in a crucial issue for the sustainability of the region.

Marco: An extremely high importance is the water provision for large cities. Cities like Quito, Cuenca and other very important Andean cities are fed by waters from the moors. By conserving this ecosystem, we are also providing water to the human along the inter-Andean alley. Since there are many ways to damage the moor, to destroy it, that is what is being avoided by creating these national parks.

Even during the dry season, the mist and humidity is captured by the flora and soils, like a sponge, accumulating water in small streams and forming various lagoons that, although small, are vital for plants, birds. and mammals that usually inhabit its surroundings. On one of these, the Limpiopungo lagoon, just a few minutes from the entrance to the park, through its walkable path you are able to see, in a surprising way, the Cotopaxi reflected in its waters, creating an almost perfect rhombus. 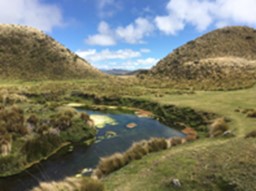 Along with the Rumiñawi and the Morurco, these three volcanoes are at the top of a unique ecosystem called the equatorial Andean moor, which begins at 3,400 meters above sea level and ends at 4,500 meters.

Marco: Since we are at zero latitude, we do not have seasons, the whole year is very similar, the only thing that varies is more or less rainfall, but temperatures and conditions are exactly the same throughout the year.

The amount of sunlight is always the same: twelve hours during the day and twelve hours at night. In the rest of the planet, at this altitude level the landscape is arid and rocky, devoid of life, but what we see here is a very diverse ecosystem, rich in flora and fauna. For thousands of years, plant species have adapted to this constant climate throughout the year but fast paced changing throughout the day with temperatures that vary from 18 degrees Celsius at noon to minus five in the morning, with strong and icy winds, the plants are very short, one could almost say creeping plants, and the colors, texture and hairiness of stems and leaves are specific to reflect the solar radiation and avoid the loss of water.

And if there is vegetation there are insects, and if there are insects there are birds and all kinds of wildlife. With more than twenty endemic species of birds, you could find the Andean duck, eagles and hummingbirds. You could even spot the Andean seagull and if you are very lucky the condor. Among the mammals there is the Andean puma, the spectacled bear, the tapir, the paramo wolf and the white-tailed deer. But since they are solitary and territorial animals, their sighting is very difficult for visitors. Those we can find with some ease near the lagoons are herds of wild horses and cattle. 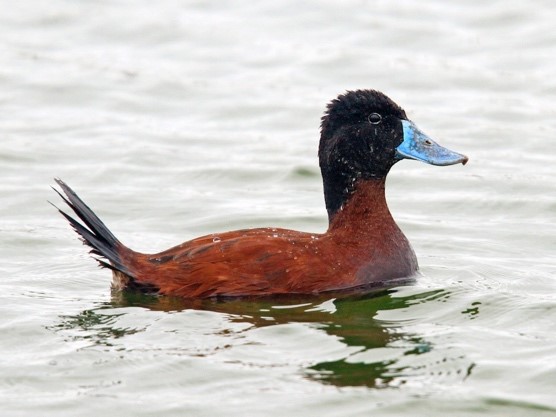 Marco: The cattle and horses, by trampling the moor, damage its spongy capacity, right? But at the same time, it becomes attractive to the tourists because sometimes you may find the chagras, which are the Andean cowboys, riding in search of their cattle to take them out of the national park.

These animals also uproot plants as part of their diet, and the manure they produce tends to contaminate bodies of water, contamination that then seeps into streams and sources of water for human consumption. That is why fifteen years ago there was an attempt to withdraw these animals from the southern area of the park. But this brought unexpected and disastrous consequences. 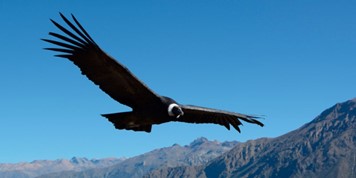 The national bird of Ecuador is the Andean condor. It is even drawn on the coat of arms of the country and plays a very important role in the mythology and folklore of the entire Andean region. However, in the northern part of South America, its population has been declining over the years and it is currently estimated that only 150

specimens remain in Ecuador. Being the condor a scavenger bird, it feeds on dead animals. It is no surprise then that when the horses were removed from the southern area of the park, the condor disappeared with them, since their main source of food is when one of them dies.

Marco: It disappeared. There was a fine group of condors, I believe eight of them, and now you see just a couple of them flying from time to time.

Currently, the Ministry of the Environment, along with the Ministry of Tourism, are trying to create a plan to reduce the animal stock in the park, conducting censuses and replicating experiences from other places. For example, in the Antisana National Park, located north-east of Cotopaxi, the number of horses and cattle was reduced and thus other mammals began to occupy the territory, causing the condor to return little by little. But not all experiences are the same, and the environment is a very fragile system to tamper with.

Marco: The pandemic has taken us to the countryside, which I hope that... the work is hard inside the national parks, they try to explain to the visitors, to give them a little talk on environmental education, to pick up their garbage, to avoid stepping on the nesting areas, to not go off the trails. Little by little, the pandemic put pressure on the officials of the national park to teach people to take care of the environment.

Between climate change, accelerating the retreat of the volcanoes glacier, the government's decisions regarding the park's livestock and the consequences of the pandemic, Cotopaxi has a future in which we all, the authorities, the scientists, universities, tourism operators and the tourist himself, must assume the responsibility of preserving it. To guard the environmental balance, it is necessary to be part of the scale.

Go Latin America Podcast is written and produced by José Lahura, dubbed by Gastón Vizcarra. Narowé Lahura is in charge of the post-production. For this episode we thank Maité Paz and Marco Peralvo of Metropolitan Touring. If you want more information about Cotopaxi National Park, travel plans, costs and sanitary protocols, contact your Go Assistant and plan your trip in the most personalized way. We are a production of Go Latin America Club, your journey begins when you imagine it. For more information go to golatinamericaclub.com, it's golatinamericaclub.com or download the app available for Android and Apple (go latin america club). Join the club, your next adventure will be lived together.