You can enjoy this paradise, navigating in a 100 passenger, deluxe, fully air conditioned Galapagos cruise ship. The Galapagos Legend has all the amenities of a cruise liner yet it's small enough for that intimate experience with nature that brings you to the Galapagos Islands.

AM – San Cristobal Airport: Departure from Quito or Guayaquil to San Cristobal in a 2-hour flight. Upon arrival, passengers are picked up at the airport by our naturalist guides and taken on a ten-minute bus drive to the pier to board the M/V Galapagos Legend.

PM – Interpretation Center & Tijeretas Hill (San Cristobal Island): Dry landing in Puerto Baquerizo Moreno, the capital of the Galapagos Islands. Passengers visit the Interpretation Center, an excellent place to learn about islands’ history in The Museum of Natural History which displays information about the volcanic origins of the islands, their remoteness from the continent, ocean currents, climate, the arrival of the different species and their colonization, among other points of interest. The human history is also showcased, chronologically narrating the most significant events related to the discovery and the island’s colonization.

PM – Suarez Point (Española Island): Dry landing. An island of geological interest, we explore volcanic formations and a riveting wildlife: large sea lion colonies and seabirds including the Española mockingbird, Nazca boobies, and the spectacular red-billed tropicbird. You will also encounter marine iguanas, lava lizards, and the colorful Sally Lightfoot Crabs. A somewhat lengthy hike will bring you among Nazca and Blue-footed Boobies, right up to nesting grounds that sometimes overlap the trail. Other birding favorites include Galapagos Dove, Galapagos Hawk, Swallow-tailed Gulls and the world’s largest colony of Waved Albatross, an unequivocal highlight during mating season (May-December). Admire the island’s dramatic backdrop, featuring the famous “Soplador”, a seaward blowhole that shoots up water up to 23 m (75 ft) in the air.

AM – Post Office (Floreana Island): Wet landing. Located on the north side of Floreana, the bay was named because in 1793 Captain James Colnett installed a wooden barrel which served as an informal post office for sailors passing through, who would take letters with them back to their destinations. Today, visitors continue the tradition by placing unstamped postcards inside the barrel, hoping that some other traveler, going to the letter destination, will take it back for free. The chances are that the letter posted can take a long time to arrive at its destination. However, there have been cases where it has arrived before the sender. We may also encounter Darwin’s finches, yellow warbler and lava lizards. Great snorkeling opportunities with Green Pacific Sea Turtles. As well, the island is best known for its endemic vegetation: Scalesia villosa, Lecocarpus Pinnatifidus, and the Galapagos Milkwort. Snorkelers can practice on the main beach among playful sea lions.

PM – Cormorant Point / Devil’s Crown / Champion (Floreana Island): Wet landing, on an olivine green, sanded beach. We hike from the black mangrove beds to a brackish lagoon, which usually holds one of the largest flamingo populations in the Galapagos. This island features some endemic plants such as Scalesia villosa, white and black mangrove, and holy stick. The trail continues to a beautiful white sandy beach, one of the most important nesting sites of Green Pacific Sea Turtles. It is important to avoid walking in the water due to the Sting Rays that may be hiding in the sand, which can be dangerous if accidentally stepped on. From the beach, one can spot sea turtles, blue-footed boobies plunging into the water, and small reef sharks floating along the shoreline in the search for food. This coral-sand beach marks the end of our trail, and we head back to the olivine beach we landed on, to swim or snorkel amongst sea turtles, reef fish, sea lions and, on a good day, white-tipped reef sharks. A small colony of penguins resides on Floreana and can sometimes be observed as well.

AM – Charles Darwin Research Station & Fausto Llerena Breeding Center (Santa Cruz Island): Dry landing. We visit the Station where the Galapagos giant tortoise breeding program takes place as part of our efforts to preserve the fragile Galapagos environment and where the famous Lonesome George (the last surviving specimen of his species) lived for decades. Admire a prickly-pear cactus forest and variety Darwin’s finches and other land birds. The Darwin Station also works providing environmental education to the communities, schools, and tourists visiting the Galapagos Islands. You will also have some free time to visit the town and shop for souvenirs.

Highlands Tortoise Reserve (Santa Cruz Island): Dry landing. In the mountains of Galapagos is possible to admire different kind of birds, such as: tree and ground finches, vermillion flycatchers, paint-billed crakes, yellow warblers, and cattle egrets (usually standing on the tortoises’ shell). The journey to the reserve offers great opportunities to see the contrasts that the island offers in reference to the variety of ecosystems. The road goes from the coast through the agricultural zone and straight up to the dense humid forests. Often, Galapagos giant tortoises are also seen on the way, wandering through pastures in the paddocks. This spot is a birdwatchers’ haven, since almost every land bird present on the island lives or migrates here.

PM – Eden Islet or Ballena Bay: Wet landing. Ballena (Whale) Bay is a beautiful green sand cove at the base of Dragon Hill on the west coast of Santa Cruz Island. The beach* contains a large amount of olivine crystals of volcanic origin. The crystals were formed when the magma was still underground. The content is magnesium, iron and silica. A small population of tortoises from Pinzón Island lived at the site, but were probably taken by whalers or previous inhabitants. Opportunity to see marine iguanas* and sea birds* followed by snorkeling.

AM – Carrion Point (Santa Cruz Island): This is a rocky cliff offers the great opportunity to explore more the various marine biodiversity of the islands. Do snorkeling among a variety of colorful fish, stingrays, and if lucky, there could be the chance to see the magnificent White tipped shark.

PM – Baltra Island Airport: After the visit, passengers will be transferred to the airport for their return flight to Guayaquil or Quito. 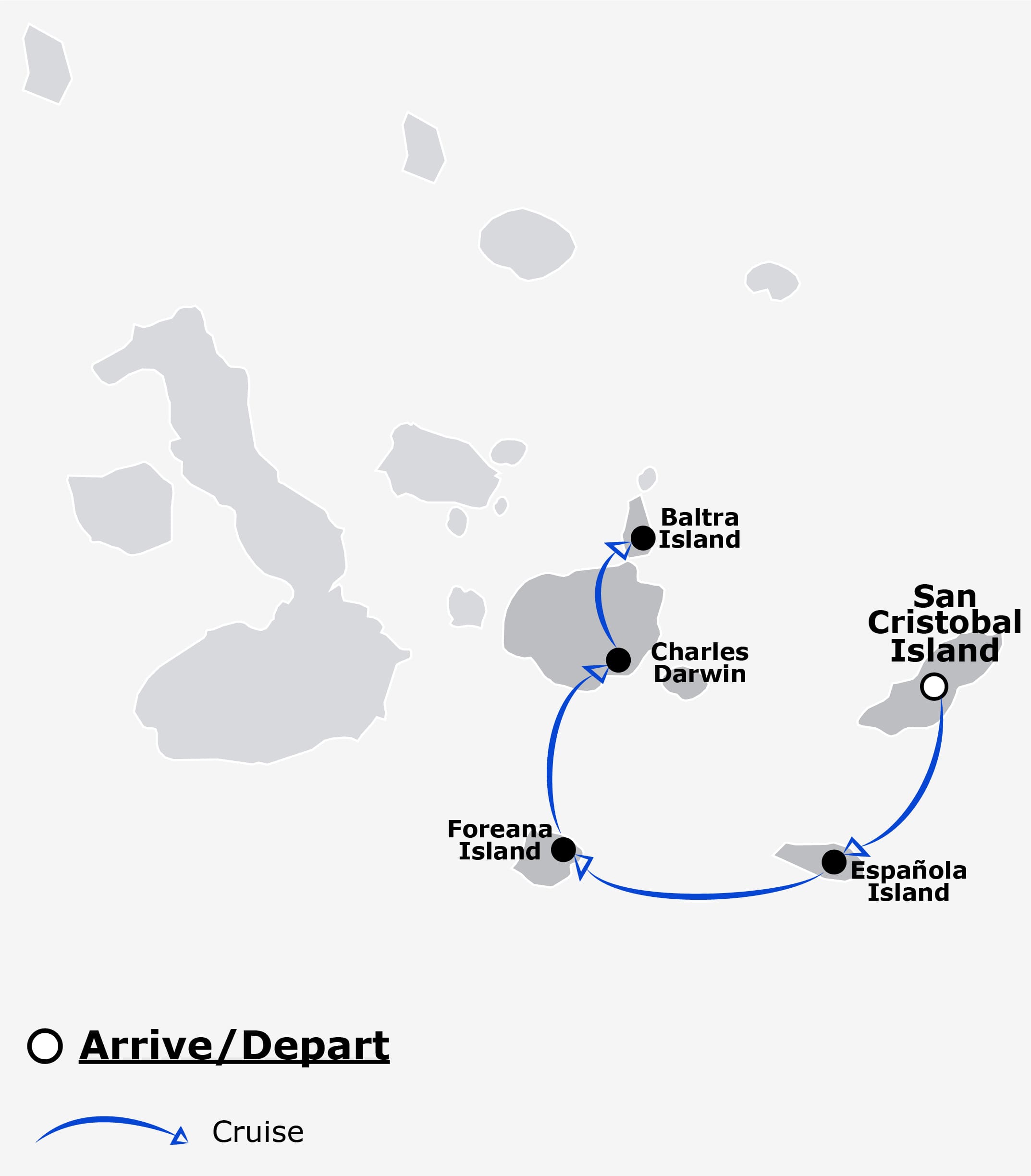