Eden is a sleek motor vessel custom-built for Galapagos cruising, its elegant interior and refined details are sure to please guests. It is one of the most economic and comfortable boats and as such offers excellent value, good service and reputation. Enjoy delicious Ecuadorian and international delicacies and socialize with fellow travellers in one of two comfortable social areas.

After landing in Galapagos, you first pay the national park entry fee and then leave the arrivals hall to where your guide will be waiting for you. After getting the group together, the guide then takes you to the boat to settle in. The island of Baltra is the only island in the entire Galapagos archipelago that is not completely included in the National Park Area. Parts of the island were used by the Americans during the Second World War as an air force base, from 1941-1948. The airport and harbor are Ecuadorian military territory, but the military presence has left its mark on Baltra.

Las Bachas (Santa Cruz): There is a white coral beach to the north of the Santa Cruz island, requiring a wet landing then an easy walk along the beach. There are small brackish water lagoons behind the sand dune where occasionally it’s possible to see Flamingos and other coastal birds like Black-necked Stilts, Whimbrels and White-cheeked Pintail Ducks. There is also a wonderful chance to snorkel here from the beach.

Genovesa is considered to be one of the most spectacular islands in Galapagos for bird species and is home to the red-footed booby. It’s a wet landing on Darwin Bay, a coral sand beach where Swallow-tailed Gulls and Lava Gulls gather near the tide pools. A trail leads us through red mangrove and salt bush, then we enter a forest of Opuntia cactus where colonies of Great Frigate nest. The males of this species inflate their red-throated pouches to attract females as they fly overhead. A few Nazca Boobies nest on the ground, and the trail leads along small tide pools up to a cliff with a spectacular view over the caldera. At low tide there are thousands of Galapagos Fiddler Crabs to see on the sandy shore.

The Barranco (Genovesa/Tower): El Barranco is a visitor site located on the southern part of Darwin Bay. The trail is made of volcanic rock and has a length of 1.5 km. We will walk along slowly for about 2 hours, exploring the flora and fauna. The youngest area of the island, from a geological point of view, is found here. The natural erosion that has occurred in these lava flows has transformed the place into an ideal spot for nesting Storm Petrels. We can see two species of petrels that nest in cavities and holes in the lava. One of the main predators of this place is the Short-eared Owl. The Nazca Booby is also present on this island. During the panga ride along the cliffs we can observe sea lions and other several species of seabirds.

Sullivan Bay (Bartolomé): This young island is inhospitable to most plants and animals and many visitors say walking here is like stepping into a different world. The dry landing is on a jetty, then the summit trail and stairs lead us on a 30 minute climb to the top of Bartolomé, a once active volcano. Along the way, we pause to marvel at lava bombs, spatter cones and cinder cones. From the top of the wooden stairs, we can gaze out across the island for a panoramic view of the island and Pinnacle Rock, an eroded tuff cone. Crystal clear water is an invitation to snorkel from the beach with schools of tropical fish and Galapagos Penguins or take a zodiac ride to spot them.

Chinese Hat (Bartolomé): So-called because of its resemblance to a Chinese hat, this is a small, attractive island separated from the larger Santiago Island (also called James) by a narrow 200m channel. We’re into the pangas for a wet landing on to small white coral beach, often with sea lions to greet us.

Daphne: Daphne is a tuff cone with little vegetation, made famous by the studies of Darwin Finches by Peter and Rosemary Grant. The panga or boat sails around the small tuff cone, not getting too close so as to avoid the introduction of any insects.

Black Turtle Cove: A real highlights - into the panga (dinghy) and then into a mangrove cove. There are many coves and inlets to explore, and your guide will often turn off the motor so you drift along. Keep an eye out for pairs of mating sea turtles (Sept to Feb), white-tipped reef sharks and golden cow-nosed rays, as well as eagle rays, golden rays and young Galapagos sharks.

Cerro Dragón: Located on the northern tip of Santa Cruz is Cerro Dragon aka Dragon Hill, offering great views over the Galapagos. As we walk towards the viewpoint, the trail passes a saltwater lagoon replete with Pink Flamingos as well as other lagoon birds; Stilts, Pintail Ducks, Sandpipers and more. We’ll most likely see Darwin Finches, Galapagos, Flycatchers, Yellow Warblers, Audubon Shearwater and the endemic land iguanas en route too. From the top of the hill, we enjoy a majestic view of the bay island covered in Opuntia cactus, Palo Santo and Cordia Lutea (muyuyu).

Charles Darwin Station (Santa Cruz): The visit to the Charles Darwin Research Station gives you the opportunity to get to known the scientific work that’s currently taking place in the National Park, particularly projects raising the different subspecies of Galapagos tortoises. Scientists from all over the globe work at the station and conduct biological research from anatomy to zoology. It is also a good opportunity to observe the Galapagos tortoises close up. In the Van Straiten Exhibition Hall, there is plenty of great information about the Galapagos Islands, replete with with photos and diagrams. The vegetation on the hike is an exuberant green colour and it’s a great place to spot Darwin's Finches – those famous wee birds.

Highlands of Santa Cruz (Santa Cruz): From the dry landing at Santa Cruz, we hop into a bus and drive up into the highlands. The scenery gradually changes as we wind our way through all seven vegetation zones found in Galapagos. Here more than anywhere, on the most populated islands on the Galapagos, the problems of introduced animals and plants are quite obvious. This part of the island is not National Park. When we reach the highest point of the road, we are back in the National Park and we head to ‘El Chato’, a farm in the highlands where we can look out for the Galapagos Tortoises in their natural, and free, surroundings. There may be the chance to Los Gemelos, Spanish for ‘The Twins’, a pair of large pit craters where we find the bright red male Vermilion Flycatcher.

Post Office Bay (Floreana): One of Galapagos’ most famous sites is Post Office Bay. Here resides a post barrel, erected and put into use in the late 18th century by English whaling vessels. Following a wet landing we head to the barrel and you can leave a postcard of your own for some other traveller to pick up and help towards its final destination, and pick up any mail from your area for you to distribute once back home. It’s a great tradition to keep up. There is a snorkel from the beach and take a zodiac ride throughout the shallow area in front of Baroness Point.

Mirador de la Baronesa / Baronesa view (Floreana): This viewpoint and trail is located on the north of Floreana Island, in Bay La Olla. It´s a formation of basaltic tuff between Punta Cormorant and Post Office Bay. The ascent of the trail is fairly easy, except for the last 33m where the slope is steep; however, steps have been implemented in this sector to help. During the panga ride here, you can observe several marine species such as golden eagle rays, sea turtles, sea lions, and hopefully some smooth Galapagos penguins. Punta Cormoran (Floreana): Floreana is the least populated island in Galapagos and has a rich and mysterious anthropological history. The mood is set at the wet landing, as your toes touchdown on seemingly green sand with the backdrop of barking sea lions. We’ll leave out the history of the island for your guide to explain, but we can tell you that you will follow a trail to a brackish lagoon, home of the Pintail Ducks, Common Stilts, and the Greater Flamingos - the pinkest in the world. The colour theme continues as we come to the “White Flour Sand Beach” made of white corals. It’s a famous nesting beach for marine turtles and for this it is important to not walk on the sand dunes. Often we see a lot of stingrays in the shallow water.

Devil´s Crown (Floreana): This is one of the most famous snorkeling sites in the Galapagos, a real highlight. Devil’s Crown is the remains of a volcano some of which has been subsumed by the sea, but with the crater horns still exposed, it looks like a black crown emerging out of the sea. Once in the water, expect to see a brilliant array of colourful fish and corals.

Punta Suarez (Española): Sea lions will usually give a noisy greeting to us as we make a dry landing on a jetty at Punta Suarez and head to the beach. Curious Hood Mockingbirds may peck at our shoelaces. From April to December, the Waved Albatross, found only on Española, perform their wild mating ritual. Colonies of Blue-footed Boobies show off for potential mates, Nazca Boobies care for their young while at night the stunning Swallow-tailed Gull - the only nocturnal gulls in the world that fish at night – take to the air. There’s more - Darwin’s Finches, Galapagos Doves and Galapagos Hawks, plus a unique species of marine iguana with traces of red and green colorings. A real highlight is the blowhole. Here, the seawater is pushed through a fissure in the cliff under great pressure. Depending on the waves and tide levels, the blowhole can force water up to 80ft (24m) into the air.

Bahia Gardner (Española): Wet landing on a wonderful, long, white beach made of coral sand. For this visit you won’t even need shoes, it’s so soft underfoot, and there is no trail to follow so you can take a long walk and explore a bit. Playa Gardner is a very good place to observe finches and mockingbirds in the saltbush vegetation, and there is some great swimming and snorkeling from the beach, where curious sea lions are never far off. Some will even launch with you from the beach and into the water. Gardner Islet is a great site for snorkeling.

Leon Dormido (San Cristobal): Kicker Rock is the remains of an underwater volcano rising vertically 150m out of the sea. A truly impressive sight, as the exposed cone has fractured in two, leaving a wildlife rich sea channel for us to enjoy. Jump in the water and drift with the gentle current through the cleft, keeping an eye out below for sea turtles, manta rays and maybe the odd harmless Galapagos shark, just to name a few. Hammerheads are occasionally seen here too. On the cliffs, we spot Blue-footed Boobies, Nazca Boobies and magnificent Frigatebirds.

Centro de Interpretación (San Cristoba): The Centro de Crianza Jacinto Gordillo, aka La Galapaguera Cerro Colorado, is where the National Park has established a breeding program for the giant land tortoises that are repopulating the islands. Here you will learn about their origin, their evolution and the threats to them by animals introduced to the Galapagos. 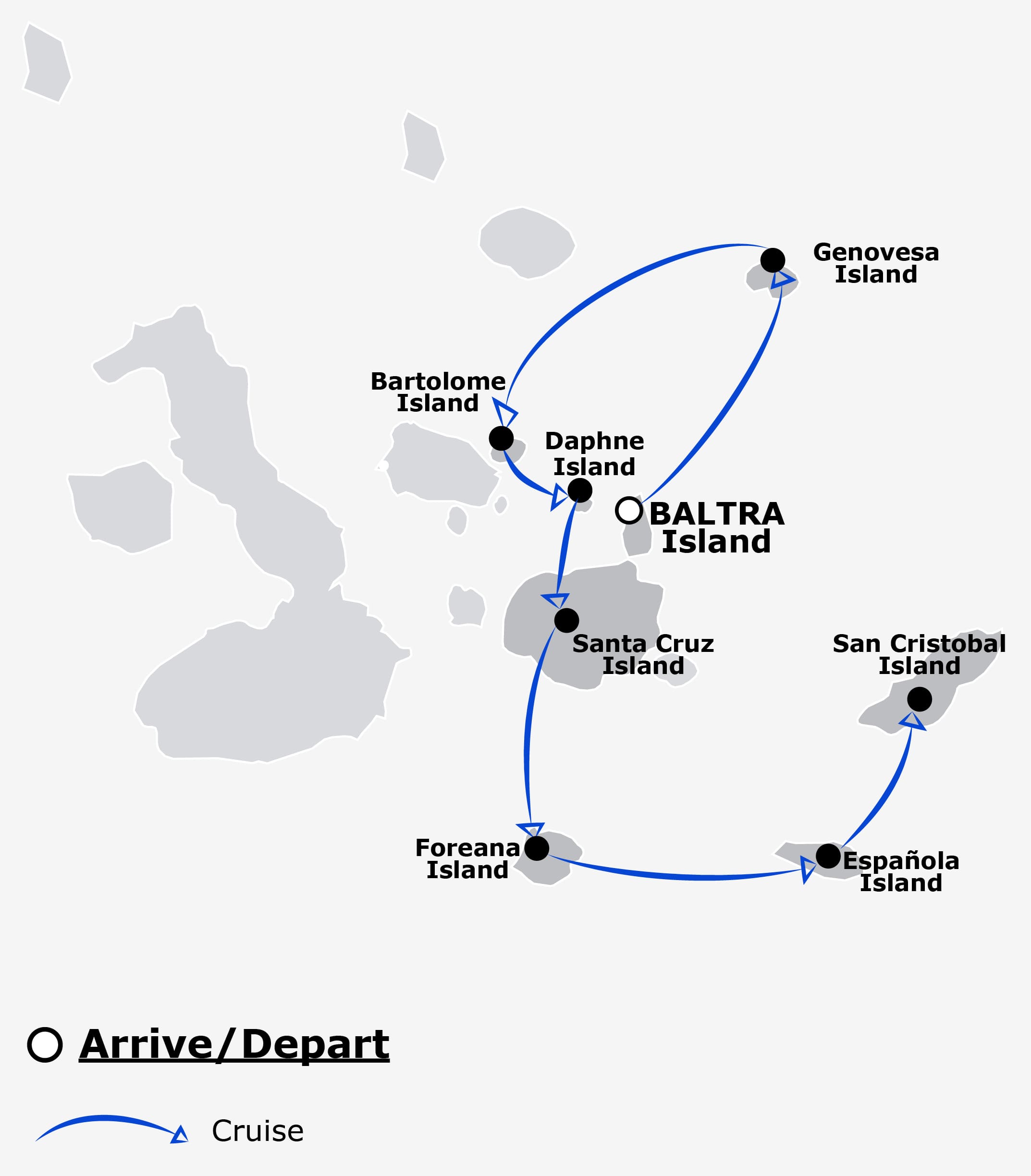