The sister ships Coral I & Coral II are the perfect combination of classic beauty and exquisite style. They combine the versatility and intimacy of a yacht with the comfort and space of a small ship. To make sure that all the passengers for the Coral I and Coral II have the same experience, both yachts do the same itinerary. For this reason, passengers can be placed on either yacht.

Arrive to Baltra Island and be picked up at the airport by your naturist guide. Take a ten-minute bus ride to the pier to board the Coral I or Coral II. Receive a warm welcome and introductory briefing from the crew and enjoy a delicious lunch. In the afternoon, visit the Fausto Llerena Breeding Center on Santa Cruz Island and the Galapagos giant tortoises and land iguanas breeding program, where the famous Lonesome George (last surviving specimen of Pinta Island) lived for decades. Here, eggs taken from Pinzon, Santiago and Santa Cruz Islands hatch without the danger of introduced species. After artificial incubation, the galapaguitos (new born tortoises) are reared until the age of 5, when they are released in their native habitats, having enough capabilities to survive alone. Since the 1970s, more than 2,000 specimens have returned to their native islands. In addition, the Darwin Station works in several scientific projects and botanical research, providing environmental education to local communities, schools and tourists. If time allows, it is possible to visit the town of Puerto Ayora to shop for souvenirs.

Begin today by making a wet landing on Mosquera Islet, located between North Seymour and Baltra Island. This flat, sandy island has a large colony of sea lions and is an excellent site to observe shorebirds such as herons and lava gulls. There is no trail on the islet, so you may enjoy the open area. Most of the islet is covered with sand and barren lava rock. Very little sesuvium portulacastrum plants grow on the sand. In the afternoon, make a dry landing on North Seymour Island, perhaps one of the busiest tourist destinations on the archipelago. Off of Baltra Island (where the airport is located) and not far from Santa Cruz, North Seymour is the most accessible for day trips out of Santa Cruz’s main port, Puerto Ayora. Enjoy an approximately two hour walk amidst large nesting colonies of blue-footed boobies, magnificent and great frigatebirds and swallow-tailed gulls for an in depth encounter with sea bird breeding cycles. You may also encounter sea lions, land iguanas, and on a lucky day, even a Galapagos snake.

This morning, make a wet landing on Santa Fe Island, where sea lion colonies surround white sand beaches. Walk along the island path through an endemic cactus forest, home to the Santa Fe land iguanas (the largest in the islands). Santa Fe is the habitat for a number of species, including the Galapagos hawk, Galapagos snakes, rice rats (one of the few endemic Galapagos rodents), a variety of finches and one of the four mockingbird species of the archipelago.

In the afternoon, make a dry landing on the island of South Plaza, one of the smallest yet richest islands in the archipelago. Your walk begins with an impressive cactus forest surrounded by land and marine iguanas. As you reach the island’s highest point, be on the lookout for tropicbirds, Nazca and blue-footed boobies, and swallow-tailed gulls. Experience a large colony of the smaller sized land iguanas, with an approximate population of 300 individuals. They feed on all kinds of vegetation, but during the dry season survive on the fruits and flowers of Opuntia cacti. Due to their proximity with marine iguanas, this is the only place on earth where you will find the Galapagos hybrid iguana.

In the morning, enjoy the iconic view of Kicker Rock (Leon Dormido in Spanish) directly from the vessel. It was formed by two rocks approximately 148 meters tall and is named for its resemblance of a sleeping lion. Kicker Rock serves as home to many of the typical Galapagos sea animals, such as birds, sea lions, blue and Nazca boobies and frigatebirds. Perhaps be a lucky visitor who spies the rare swallow turtle gulls, tropic birds and pelicans. Later make a dry landing at Cerro Colorado in Puerto Baquerizo Moreno and visit the San Cristobal Giant Tortoise Breeding Center to learn about the National Park’s conservation programs. Enjoy a beautiful landscape on the way to the reserve. You will also have the opportunity to visit the village’s port, have a drink or shop for arts and crafts and other souvenirs. After your visit, say farewell to your fellow travelers and go to San Cristobal Airport for the return flight to the mainland. 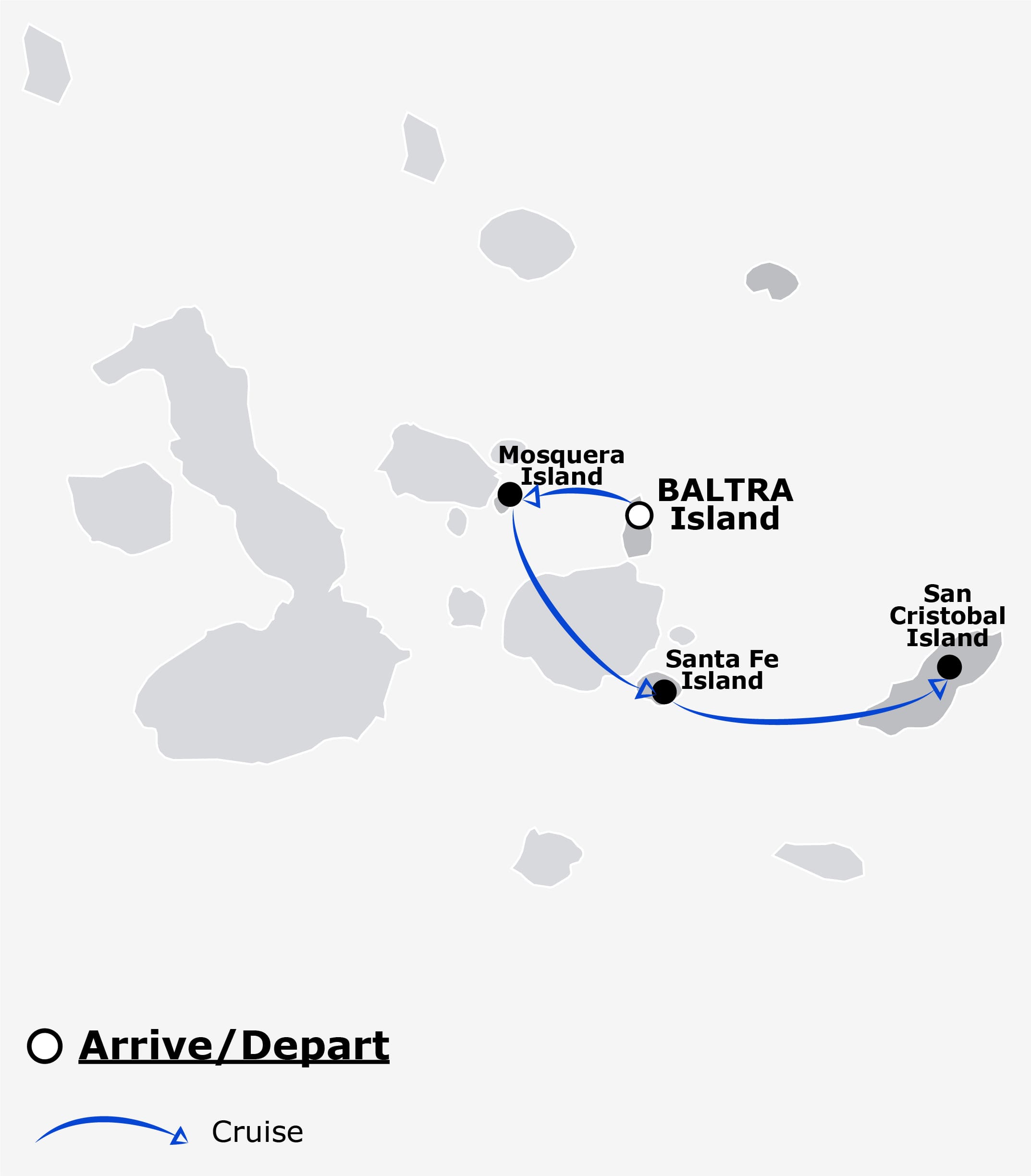