The M/Y Aida Maria offers a great combination of comfort, style and economy for tours in the Galapagos. Its design is based in efficiency and comfort with social areas and 8 cabins providing optimum comfort for the experience of exploring the Galapagos. It is a charter yacht from small groups as well as for individual travellers.

Fly from the Ecuadorian mainland to the islands on an early morning 90-minute flight. As you prepare to land in Baltra, look out the window. The landscape below will seem otherworldly – you’ll truly be landing in a place like no other. The Galapagos Islands are completely unique and you’re about to see why. Your bilingual naturalist guide will greet you at the airport and meet you after customs. During lunch he/she will introduce you to the islands, specifically the flora and fauna that you will encounter at our first destination, Las Bachas Beach.

On the sandy white beaches of Las Bachas you will get a close look at a sea turtle nesting area as well as a lake frequented by pink flamingos and other migratory birds. Afterwards, you’ll cool off with a dip in the beautiful, blue Pacific Ocean. As this is the first evening together, the crew will invite everyone to a pre-dinner cocktail on the yacht before the welcome dinner. If the night is clear, as it usually is, the stars above will sparkle; look for the Southern Cross, the Big Dipper (turned up-side down!) and Orion. (Lunch, Dinner).

Early in the morning you’ll have breakfast and then you’ll disembark at Genovesa “Tower” Island, which is located in the northeastern part of the Galapagos (less than half a degree north of the equator). Genovesa is known as one of the best places to see large populations of unique, Galapagos birdlife and is a highlight of any itinerary.

At “Tower” Island you’ll anchor at Darwin Bay, which is located on the southern part of the island, and is actually the caldera of an extinct, partially eroded volcano, with the surrounding cliffs forming the inner lining of the rim. While the origin of the name “Tower” is not known, one can imagine it had something to do with these towering cliffs in a horseshoe shape around the beach. After a wet landing on a coral beach the trail begins in an area where there are several swallow-tailed gulls. The tour will be a long, fairly-easy walk, but it is usually hot and dry here, so you may want to carry some water. Along the way, you’ll see Great Frigatebirds, Nazca Boobies, Blue-Footed Boobies, sharp-beaked finch, large cactus finches, large ground finches, and mockingbirds. Nearby tidal pools in the volcanic rock are places for wandering tattlers, lava gulls, whimbrels and turnstones to hunt for seafood. As you walk back from the beach, you’ll see a variety of Opuntia cactus and mangroves. You will have an opportunity to snorkel after this or the next visit.

We’ll visit El Barranco, or Prince Philip’s Steps, during the afternoon. This is the only other visitor site on Genovesa aside from Darwin Bay. You’ll first visit the beach and continue on the trail to see nesting birds like red-billed tropicbirds, storm petrels, and red-footed boobies. Hopefully, we’ll also be able to spot the adorable Galapagos short-eared owl and perhaps the Galapagos Fur Seal.

After this full day, you then return to the boat for dinner and overnight. (Breakfast, Lunch, Dinner).

Bartolome Island contains one of the most photographed vistas in the archipelago. This island is quite young and quite volcanic; therefore, it’s relatively unpopulated with only a small handful of die-hard plant and animal species having survived long enough to call this lava-land home. The land-visit here is more about the amazing view of the pinnacle standing straight out of the sea; the volcanic formations of the Islands; and get in an invigorating hike. After a short hike up the wooden stairs, you’ll return to the nearby beach for some fun snorkeling. Here at Bartolome, you’ll have a very good chance of snorkeling alongside the unique Galapagos penguin. The colony of penguins here seem to love flying through the water as snorkelers swim in the calm bay.

After the visit to Bartolome Island you’ll visit nearby Sullivan Bay. At the turn of the century a huge lava flow spilled right down to the sea and today you can stroll across this black volcanic expanse, admiring its time-frozen ripples, bubbles and ropes. This is a fascinating area for seeing the differences in the volcanic creation of the Islands. There are two nearby beaches also where sea turtles lay their eggs and you may find broken egg shells here left behind by the baby turtles. (Breakfast, Lunch, Dinner).

Early in the morning you’ll arrive to Daphne Island, a conical Island, which is home to thousands of birds such as blue footed boobies, frigate birds, tropic birds, and many more. You won’t go ashore here, but will navigate around this volcanic cone to get as close as possible to observe the birds without disturbing them (of course, binoculars are recommended to make sure you get a good look at the birds). Daphne has been a great research site on which many scientists have spent years studying the behavior of Darwin’s finches.

After this visit you’ll move on to our next site, Black Turtle Cove, which is a red mangrove lagoon on Santa Cruz and is a nursery for many sharks and rays. It’s also a great location to observe mating turtles around this time of year. You’ll see large groups of resting White-Tip Reef sharks, schools of Golden rays and Spotted Eagle rays, and a few juvenile Scalloped Hammerhead sharks and Black-Tip sharks. Paddles rather than the loud panga engines are used to move around the area. You’ll go for a naturalist walk here and snorkel in the nearby water with your guide.

After lunch you’ll navigate for a couple of hours to Cerro Dragon, where you’ll make a dry landing on lava rocks. Cerro Dragon is a small bay on the west coast of Santa Cruz and got its name from the many land iguanas that live in the area. Land iguanas are endemic to the Galapagos Islands where they have found good mating and nesting areas. (Breakfast, Lunch, Dinner).

After breakfast you’ll sail to Santa Cruz Island, where you’ll visit the world-famous Charles Darwin Station, a non-profit institution that dedicates itself to studying and protecting the flora and fauna of the Galapagos. This is one of the best places to see land tortoises, including Lonesome George, the last survivor of his subspecies. Of course, you’ll also visit the station’s Tortoise Rearing Center. Here you can find baby, hand-sized tortoises, between the ages of one and five, and marvel at how they achieve such large sizes as adults (500 lbs. or more!). Galapagos tortoises are believed to have a lifespan of over 100 years, so the young ones have a long life ahead of them as long as they receive the protection they need.

After this visit, you will be transferred to the Baltra Airport to catch your plane back to the mainland. 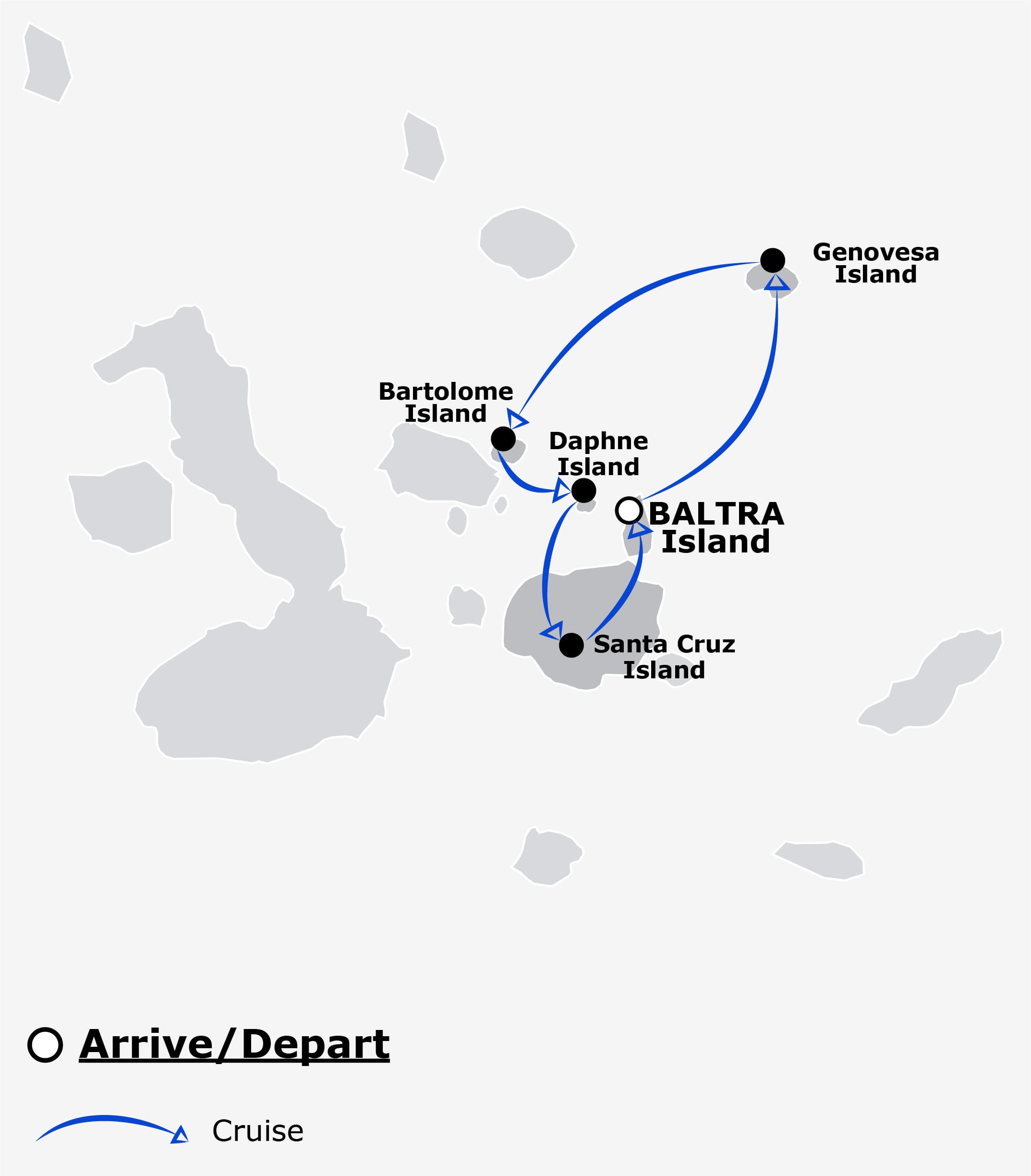 An app that offers you a new way of traveling!