Reception at the airport and transfer to the selected hotel.

The place to start is Colonial Quito, a city of narrow cobblestone streets lined with whitewashed walls and, rising above, the steeples and cupolas of the city´s many spectacularly decorated historic churches. The city has one of the best preserved colonial centers in all South America and its integrity was assured in 1978 when the United Nations declared Quito a World Cultural Heritage site.

At the end of the city tour we will visit the Panecillo hill, where we will be able to admire the famous Panecillo’s virgin and spectacular views of Quito.

Our chocolate experience starts with a guided journey by story through the history of Ecuadorian cacao and a tasting of chocolate.

Transfer to the airport.

You will arrive at Baltra in the morning. After going through immigration and baggage claim, you will be met by a Galaven staff member and transferred to the yacht. You will be shown to your cabin where you will have some time to settle in before lunch and a welcome briefing.

In the afternoon you will visit Black Turtle Cove in the northern part of Santa Cruz. This inlet is surrounded by mangroves and is only accessible by dinghy. The shallow cove is a haven for young marine life. Black-tip and white-tip reef sharks, sea turtles, and a variety of rays are often spotted here.

Genovesa Island is located at the inner part of Darwin Bay. This area contains an abundance of frigate birds and other interesting seabirds. Behind the small beach filled with nesting areas for frigates, redfooted boobies, and swallow-tailed gulls are a number of tide pools. At high tide it is likely that the trail will be covered with water.

Your morning visit is to El Barranco which is also known as Prince Phillip’s Steps, El Barranco’s steep and rocky path leads up to a high cliff-face. A marvelous view can be appreciated from here. This site is also home to Palo Santo vegetation as well as red-footed boobies, short-eared lava owls, Galapagos swallows, and Galapagos doves.

In the afternoon, you will head to Darwin Bay. This white-sand coral beach heads a half mile trail (0.5 miles / 0.75km) that winds through mangroves filled with land birds. Nazca boobies, red-footed boobies, and swallow- tailed gulls can be spotted here. Further down the path are tidal pools where sea lions swim playfully and at the end of the path there is a spectacular view off the cliff.

The south of both Plaza islets is the best place to encounter endemic Galapagos land iguanas. Watch your step and don’t stumble over one of them whilst distracted by the equally bizarre giant prickly pear cactus-trees! These iguanas are not only ugly as Darwin pronounced, but also very patient and photogenic models with strikingly saffron colours.

Arriving at the upper rim, you get to know the other, wild and windy face of South Plaza that provides a completely different habitat. About 20m/75ft downwards impressively droning waves splash against the foot of massive cliffs. Being talented rock climbers, sun basking marine iguanas have escaped the cool shadows of the wall. Clouds of petrels, storm petrels, shearwaters and brown noddies make spectacular flights and sometimes appear to walk on the waves.

Practically every animal on Santa Fe is unique; endemic to the Galapagos, or even to this island alone and extremely vulnerable! This extraordinary island is a remnant of probably the most ancient volcano on the Galapagos, and gave evolution enough time and isolation to create its wonders.

Your experience starts before anchoring, when the contours of its bizarre giant prickly pear cactus (opuntia) forests become distinguishable. These largest cacti of the islands have extremely thick trunks indeed, and can grow over 10m/33ft tall! You will land right in the middle of a Galapagos sea lion colony on the beach. From their outlooks at the beach ridge surprisingly fearless Galapagos hawks are ready to snatch away a lava lizard; not worrying that even these are unique.

Kicker Rock (San Cristobal) has become one of the photogenic landmarks of the Galapagos. Clearly visible from afar, nature has moulded a massive offshore block of rock with a pointy tower next to it. Reaching about 150m/500ft above sea level this compact rock without typical stratified layers of cemented ashes is thought to be the remnant of a former tuff cone, which has eroded completely away; a resistant lava mass that never left the crater pipe remains.

While sailing around and spotting blue-footed boobies and great frigatebirds you can observe this intriguing sculpture from changing angles. From the side it takes the form of a giant shoe, upside down with the tower as the high heel (hence its English name Kicker Rock). In longitudinal direction it rather resembles a sleeping lion (hence its Spanish name Leon Dormido). It is an experience to pass the narrow channel between the main body and the spine.

Flight from Galapagos to Guayaquil.

Upon arrival transfer to the selected hotel.

Quito is Ecuador’s colonial and actual capital but Guayaquil is the country’s largest city and busiest port. Situated on the Guayas River, this bustling city has an endearing, tropical atmosphere, plenty to experience, and is an important stop on every Ecuador tour. On this day tour, you visit several of the city’s highlights such as the Malecon 2000 Boardwalk, the Parque Seminario, and a park that features exhibits on life in Guayaquil during the 19th century. You will also see an animal rescue center with wildlife from the threatened dry forest habitat that occurs around Guayaquil.

After viewing the boats and lazy river on the waterfront, you will walk past and learn about signature Guayaquil structures such as the Crystal Palace, the Moorish Tower, and the Governor’s Office. You will also see Santa Ana Hill, the picturesque neighborhood where the city was founded, see what life was like in Guayaquil a century ago, and enjoy the comical antics of the hundreds of iguanas that share the Seminario Park with its daily visitors.

Transfer from the hotel to the airport to take your international flight back. 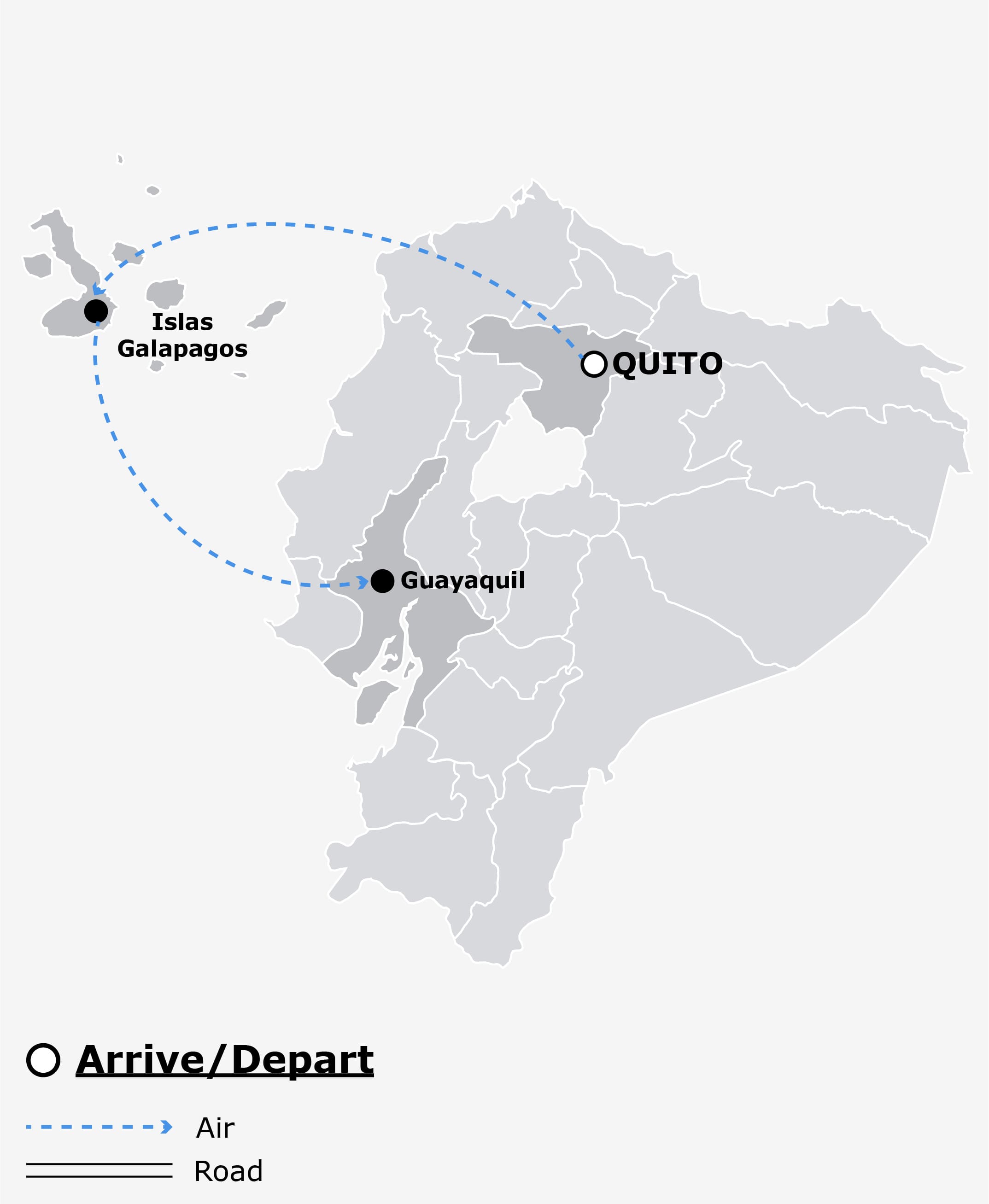 THE ANDES AND AMAZON OF ECUADOR
see destination