Transfer from the airport to the hotel.

Santiago de Chile, today a modern and bustling city with 6 million of inhabitants, was founded by the Spaniards 470 years ago. The tour starts driving downtown along Parque Forestal, a French style park that runs along Mapocho River. Drive up Santa Lucia hill where Santiago was founded, today a public park located aside of the National Library. Leave the hill and drive through the heart of downtown to Plaza de Armas (Main Square) the spot from where the city has grown throughout the centuries. Some important buildings such as the Cathedral, the City Hall, the Central Post Office and the National Historical Museum surround it. Drive to the Civic area to see La Moneda Presidential Palace, current seat of the government. Continue around the streets that were elegant at the beginning of the XIX Century, passing by Dieciocho Street that grants the status of Typical Zone, the Cousiño Palace built around 1870 and the Basilica de los Sacramentinos, a free imitation of the Sacred Heart Church of Montmartre in Paris. Reach Alameda Bernardo O'Higgins Avenue, the city's main street, to conclude the tour visiting the San Francisco Church, erected between 1586 and 1628 by the Franciscan Order, and its Colonial Museum and Monastery, with a peaceful garden in the in middle of the city and with an important religious art collection from the 17th and 18th centuries.

The tour departs from Santiago to the coast, crossing the valleys of “Curacaví” and “Casablanca”, we will see on the road beautiful vineyards, “fruit tree farms” dairy farms and forest reserves.

Valparaiso is a port city founded in the sixteenth century and declared world heritage by UNESCO, Valparaíso is the “cultural capital of Chile”, commercial port and the Chilean navy operation center, bohemian and college town, charming, historic and picturesque harbor with interesting architecture and beautiful views of the Pacific Ocean.

Later we will visit the museum of the famous Chilean writer and poet Pablo Neruda called “la Sebastiana”.

Then we will start our walking tour by the wonderful viewpoints and promenades, “Gervasoni” and “Atkinson” located in the most important hills of Valparaíso, “Alegre” and “Concepción” and will also use the ancient and picturesque city funiculars.

Then and through a beautiful oceanfront path, reach the city of Viña del Mar, known as the "Garden city", elegant, sophisticated and inspired by the French riviera we will drive by the scenic " flower clock “, will travel Peru avenue alongside the traditional "casino", the first of Chile founded 1930, and his elegant " hotel del mar”. Finally, we can observe and photograph a real “Moai” from Easter island located outside the major museum of paleontology and anthropology. Lunch is optional; we recommend sample the varied cuisine of the Chilean coast, fresh fish and seafood.

Departing from Santiago to the south to reach the village of Pirque where is located Viña Concha y Toro, founded by Melchor Concha y Toro in 1883, with strains brought from the Bordeaux region in France. Today is the largest winery in Chile and its wines are exported to worldwide.

We walk around the park designed by the famous French landscaper Guillaume Renner, see the main house, shown on the label of some of the concha y Toro wines, know the technological aspects and appreciate wine growing grapes and visit ancient cellars, where we will hear the incredible wine legend "Casillero del Diablo" which has become famous Chilean wine worldwide. While walking facilities, can taste some of the best wines produced by concha y Toro and the visit ends on wine shop where you can buy some wine or memories.

Transfer from the hotel to the airport. 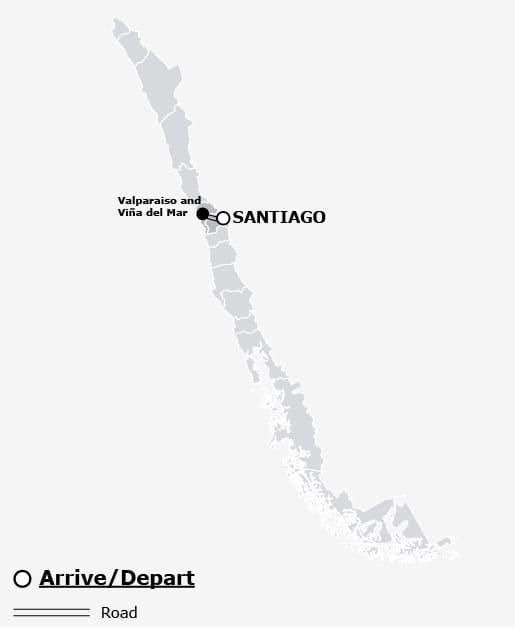 EASTER ISLAND, THE CENTER OF THE WORLD
see destination

An app that offers you a new way of traveling!