Transfer from the airport to your hotel. Private Service.

Enhance your sightseeing experience of La Paz of the beguiling Bolivian capital and the nearby Moon Valley. With a knowledgeable guide, witness the enchanting atmosphere of the Witches Market; admire significant landmarks like San Francisco Church and Plaza Murillo; and marvel at the natural wonder of Moon Valley. Gain fascinating insight into the city’s colonial history and peruse intriguing exhibitions in some of the capital’s museums.

Transfer to the airport to take the flight to Santa Cruz. Upon arrival you will be picked to go across Chiquitos plains, passing through Río Grande, San Ramon and the Jesuit Mission of San Javier. This is a beautiful colonial town with an impressive church that was declared “World Heritage Site” by UNESCO in 1990, just as the other churches on this circuit. After lunch, you will go through the open forests and savannas; until Concepcion town. This is the largest mission centre, with an outstanding Jesuit church built between 1753 and 1756, a true gem of the eighteenth century in colonial and Baroque style. Your visit to the church will be complemented by the Missionary Museum, where original music scores of the Renaissance-Baroque period are preserved.

Overnight at selected hotel in Concepción.

You will take a trip to the Santa Rita community, to witness the skills of women artisans producing textiles according to their traditional customs.

Continue to San Miguel, visit its church, declared also as World Heritage Site by UNESCO. You will appreciate its restoration workshops, as well as carvings and paintings on wood. Then, return to San Ignacio to finish the day visiting its church.

You will depart to Santa Ana to appreciate the only church built by Indians and mestizos, despite having been initiated by the Jesuits. It has a rustic appearance and is smaller than the other churches. Inside the church you will be able to appreciate the most beautiful organ, a true relic!

Then it’s off to San Jose de Chiquitos, crossing Chiquitos plains from north to south and having a Box Lunch on the way.

Visit the San Jose de Chiquitos mission complex. With a church and a museum, this is one of the oldest in the area, founded in 1696. It is different from the other churches because it’s the only one built of stone and lime.

Take a trip across the bi-oceanic road, where the stunning scenery and a Catholic shrine are appreciated at the foot of Chochis Sanctuary. This shrine presents a collection of wood carvings, showing the great legacy left by the Jesuits who taught art to evangelized locals. It was built in gratitude to the Asuncion Virgin and in memory of the missing people from the 1979 floods.

The journey continues to Santiago de Chiquitos, which still maintains its small and rustic church intact. In the afternoon, you will walk until you reach the Tucabaca viewpoint, where you will be able to appreciate the vast Bolivian Chiquitania. This magical place is called “La Antesala del Cielo” in Spanish, which means Anteroom from Heaven. You won’t want to miss this excursion and you will find out why!

Departure to Aguas Calientes (30 min), on the banks of the river that carries its same name. These waters possess therapeutic properties due to mineral concentration. After a relaxing bath, return to Santa Cruz (5 1/2 hours).

Transfer to the airport. 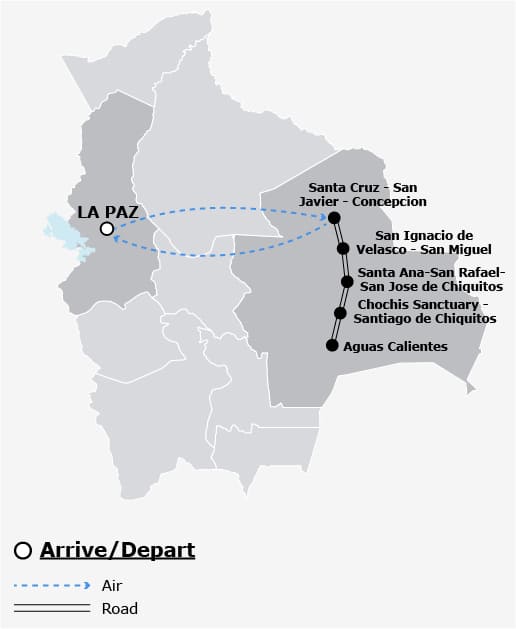